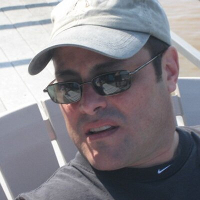 A personal message to you from the Founder John Martinson

First of all, permit me to thank you for your time spent reading about Robolinux. Indeed time is the most valuable commodity on earth. In fact the primary mission here at Robolinux is to provide robust secure Linux Operating Systems and software that significantly increase your productivity on a Personal Computer or laptop, which ultimately saves you time.

My vision was to create "An operating system for your world", so I traveled to many countries, even to many in Asia and listened carefully to hundreds of PC and laptop Users on several continents and here is exactly what I learned: Each user had several things in common. Firstly they all wanted something virus & malware free. Secondly they wanted to run all their Windows programs they currently like and own. Thirdly they did NOT want a learning curve. The fourth request was to increase their productivity to a greater level. i.e. Accomplish more tasks in less time. In essence they wanted to do things faster and more securely than what they can do today with Microsoft Windows. They also said it had to be 100% FREE so they could install it on any PC or laptop they desired without paying Microsoft hundreds of dollars per machine. Many people I talked to had tried Linux but said they went back to Windows so they could use their programs that did not work on any linux operating system.

"An Operating System For YOUR World!"
Today my vision is a reality. For ten years now, millions of Users all around the earth have been reaping the rewards from our Robolinux Operating Systems that offer optional expert Tech Support along with Stealth VM, C Drive to VM and many innovative software applications available with the Robolinux 12+ annual subscription. Indeed the Robolinux White Hat series 12 versions run many times faster than any Windows OS. Every Robolinux version can run regular Windows programs flawlessly and natively inside its desktop which increases the speed with which you can operate your PC or laptop in our rock solid Linux partition that is not affected by Microsoft Windows viruses & malware. Please note: You cannot run high end games or HD Studio software inside our Virtual Machine. Please review our "System Requirements". I am certain that after downloading and running any of our Robolinux operating systems you will be pleased. In closing if you feel in your heart to support Robolinux then click on the donate button below. Blessings to you from YHWH

Since 2002 John Martinson aka Robo has been passionately dedicated to providing every PC & laptop User around the World, in many languages with the easiest way to download, install and operate the highest quality, fastest, most secure, virus free robust PC operating system effortlessly and economically. After rescuing hundreds of disgruntled individual Windows users and Companies by installing Redhat, German Suse, & French Mandriva Desktops and servers between 2002 and 2005, Robo gained an arsenal of Linux knowledge & expertise. Today the Robolinux White Hat series 12 versions are rock solid operating systems.

The Robolinux Charity Foundation in Cambodia

The Robolinux Charity Foundation pays for and provides poor Cambodian children with School tuition fees, books, uniforms, daily transportation and lunch money. Robolinux is dedicated to a very important mission which is to give poor children in 3rd world countries a chance to have a good education and the ability to read the bible so they can learn about our Father in Heaven. Did you know that if every person donated just one dollar who downloads any of our three Free series 12 operating systems, then the Robolinux Charity Foundation could put over 1000 poor Cambodian children in a School for a year?